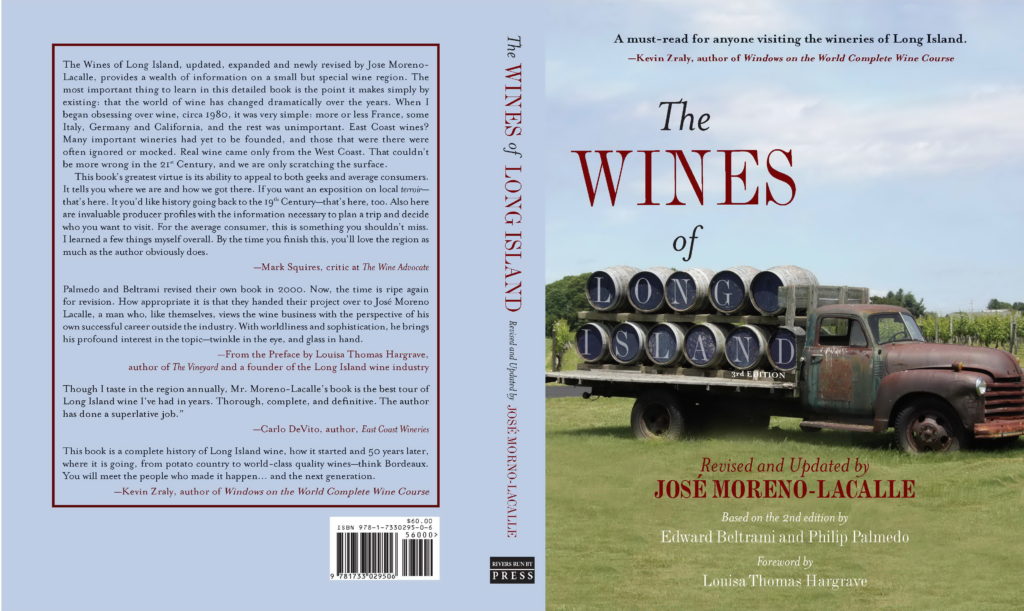 The Wines of Long Island was originally published in 1987 and a second, revised edition was issued in 2000.  19 years later, it remained the best and most complete single volume on the history, geography, viniculture, winemaking, and the wineries of Long Island.  It was carefully researched and very well written.  It was also seriously out of date.

In the 19 intervening years a very great deal of change has taken place in the wine industry of the region. In 2000 there were 25 wineries and vineyards, about half of which are no longer in business; in 2019 there are 62, including several wine brands that have no winery or vineyard as such and use a crush facility.  A handful of the wineries are not even in the East End, but elsewhere in Suffolk County, with two in Brooklyn.

19 years ago the issue of sustainability was scarcely on the radar. Today, sustainable winegrowing is a major issue worldwide, and a new entity, the Long Island Sustainable Winegrowers association, is providing independent certification for members.

The new edition of The Wines of Long Island provides all this new information as well as updates to the history of the region in a new edition.  Every wine producer on Long Island is described in the book, some extensively, often with anecdotes. This edition is intended as the principal reference and guide for the wines of Long Island.  It has 274 pages, a foreword by Louisa Hargrave, and an expanded section on terroir, varieties, and vintages.  Most of the more than 130 illustrations are in color.

Mark Squires of The Wine Advocate says, “This book’s greatest virtue is its ability to appeal to both geeks and average consumers. It tells you where we are and how we got there.”

Kevin Zraly, wine instructor and author of the popular Windows on the World Wine Course, writes that the book is “a must-read for anyone visiting the wineries of Long Island.”

Carlo DeVito, author, East Coast Wineries , writes: “Though I taste in the region annually, Mr. Moreno-Lacalle’s book is the best tour of Long Island wine I’ve had in years. Thorough, complete, and definitive. The author has done a superlative job.” He also wrote a review of the book on his own blog Website, East Coast Wineries.

Louisa Hargrave, a founder of the Long Island wine trade, wrote in the foreword of the book: “Palmedo and Beltrami revised their own book in 2000. Now, the time is ripe again for revision. How appropriate it is that they handed their project over to José Moreno Lacalle, a man who, like themselves, views the wine business with the perspective of his own successful career outside the industry. With worldliness and sophistication, he brings his profound interest in the topic—twinkle in the eye, and glass in hand.”

In November 2019 Lenn Thompson published a very positive review in the North Forker of my book: The Next Great Book for Long Island Wine Lovers. I couldn’t have asked for more. Please do read it!

The book has been published under my own imprint, Rivers Run By Press, since late August 2019, and is already in four bookstores on Long Island: Southampton Books in Sag Harbor, Canios Books, also in Sag Harbor, Burton’s Books in Greenport, and Book Hampton, in East Hampton. Kitchen Arts & Letters in Manhattan is also selling the book. As of October, eleven wineries also carry the book: Baiting Hollow Vineyards, Bedell Cellars, Castello di Borghese, Channing Daughters, Laurel Lake Vineyards, Osprey’s Dominion, Raphael, Roanoke Vineyards, Sannino Vineyards, Sparkling Pointe, and Wölffer’s. It is also available at the wine shop, Wines By Nature, in Wading River. Copies can also be ordered directly from me on this Website,  and soon from Amazon.

In the meantime, I’m hoping that Wine Spectator will review the book, but it will be a few months before that happens.

I have been writing about winemaking and viniculture in Long Island for my blog, Wine, Seriously, since 2010, and have earned the Wine & Spirits Education Trust (WSET) Diploma in Wine (a professional certification) and an MA in Art History as well, which gave me the foundation to use a scholar’s approach to writing the new book.