Based on an interview with Perry Weiss, and Rosamond and Christian Baiz, 12 May 2011 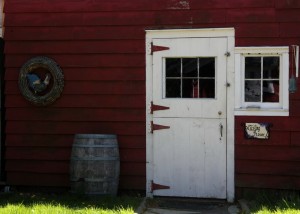 Upon arriving at the vineyard, which is just off the main road going through Southold, the old barns and house give little clue as to where to go, and there may be no one there to greet you.  Still, you approach the likeliest suspect, a low, long barn which, it turns out, has a sign reading “Tasting Room” near a kind of logo confected out of a ring of old wine corks encircling a painted tin rooster that hangs on the barn siding.  Still no one there and the tasting room was closed, because everyone is out in the fields pruning, removing vine suckers, or spraying the vines.  This is a very small family operation, and the day I arrive, by appointment for the interview, there is too much to be done to have someone greet me upon arrival.  It is, after all, mid-May, early for visitors but timely for the vineyard.

I phone Perry Weiss, the winemaker, on her cell and she arrives

shortly from the vineyard.  She is direct, engaging, and very polite, the while giving me all the time I need to conduct my interview with her.  When done, she takes me into the fields to meet her mother, Rosamond Phelps Baiz, the vineyard manager, who is removing any suckers growing from the base of the vines with a gloved hand, nearly caressing each vine as she rubs the base in a careful but swift motion.  Then we go to the house, where I meet her father, Christian Baiz, the vineyard factotum, who is briefly on a break

from spraying the vines to refill the machine.  In fact, Perry has taken over the duties of winemaker from Ros, who replaced Perry in the vineyard.  The truth of the matter in an operation so small is that everyone has to pitch in everywhere, so all three of them are jacks-of-all-trades.

This is wine-growing and wine-making writ small—a true family operation that is not sustained by deep pockets but rather by passion, enthusiasm, and caring about what they do.  It came into existence as a vineyard because the property has been in family hands since 1919.  The first vineyard was established in 1974 by Chris using cuttings of Chardonnay, Sauvignon Blanc, Semillon, Cabernet Sauvignon and Pinot Noir that they bought from Alex and Louisa Hargrave, who had themselves just started up their own vineyard the year before—the very first one on Long Island.  More Pinot Noir vines were added in 1985, and then Merlot and Cabernet Franc in 1997, just after Chris and Ros purchased the property from his family.  They had to pull up the Chardonnay when it became clear that it wasn’t doing well at the site.  In all they’ve now planted a total of twelve-and-a-half acres to vines, which produce about a thousand cases of wine every year.  At the time they acquired The Old Field, they were living in Bronxville, just north of New York City, and decided to make a go of running a vineyard and so moved permanently to Southold and the farm.

Like the Hargraves when they started, the Baiz family had little notion of how to run a vineyard and make wine, but they were determined not only to succeed in the vineyard but to make quality wine as well.  Also like their predecessors, they didn’t start with a large amount of capital.  Unlike them, however, they had the experience and knowledge of the Hargraves themselves to draw upon, as well as of other wineries and vineyards that had gone into business before they did, such as Bedell Cellars, Lenz Winery, Peconic Bay, and others.   Still, Ros had never driven a tractor, for example, and much had to be learned from scratch.

Now, they work as a team, though the one hired hand they’d once relied on was no longer available, as he was denied a visa to return to the US to work in the vineyard, though son Ryan does join in the work when he visits.  Working over twelve acres means nearly 12,000 vines that need to be tended, which is a great deal of work to be done manually.  There are six contiguous plots, including Sauvignon Blanc, Merlot, Cabernet Franc, and Pinot Noir.  Recently they also planted 250 vines of Sauvignon Blanc by the Bay to see how that will do.  For now, lacking significant wine-making capabilities, they make wine from their own grapes at the winery at Lenz Vineyards, where Perry works with master winemaker Eric Fry to create varietals with their own distinctive signature of the Old Field.

Unlike most other vineyards on the Island, The Old Field has had no need to adjust the acidity of the soil, for the site was—before English settlers purchased the land over 370 years ago—occupied for perhaps 500 years by a large Corchaug Indian village of about 170 huts.  The inhabitants evidently fished and harvested tons of shellfish every year (the field is right on Southold Bay).  The shells were cast in the field and over the years became part of the soil, making it rich in calcium and keeping the pH high at 6.8-7.1.  The vineyard also enjoys a high water table, so there is little need to irrigate, except for very new plantings.  This alone makes for a unique terroir.

In this bucolic setting there is a pond which is a source for frogs and insects, including dragonflies that are natural insect predators.  The space between the rows has cover crops of grasses and legumes, including clover and fescue, which also encourage a diversity of insects.  They have a wild-flower patch as well, which also promotes the presence of ‘good’ insects in the vineyard.  And then there are the red-tailed hawks, the great horned owls, and always the chickens.  Here, IPM seems to take care of itself.

Indeed, the commitment to sustainable viticulture also includes “hand-harvesting, hand leaf-pulling, hand pruning” and so on, “which keeps the tractor out of the field, lessening soil compaction and diesel usage.”  They also flail-chop vine prunings, thus adding mulch back to the soil.  They use a tractor only to handle needs that

cannot (or ought not) to be done manually.  For instance, they employ organically-approved sprays where possible, delivered by a trailer-sprayer designed to focus  on specific parts of the vine, as they cannot afford the far more expensive and effective tunnel-recycling sprayers used by more affluent vineyards.  (Therefore, as drift is inevitably a factor under windy conditions, they also try to confine spraying to windless days.)

Old Field Vineyard is an enthusiastic participant in the Cornell University VineBalance Program, and do not mind that they are regularly checked on to ensure that they are in compliance, which is what is required of those vineyards that participate in the program.  They do not, however, at least at this time, think of converting the property to organic farming, though they will use organic viticulture where it is practicable for them.

One of the reasons that the Baiz family purchased the property in 1996 was to keep it from being developed.  The one thing that they will not do is sell the development rights to the fields as some other vineyards have done.  There is a problem with that, after all, insofar as land values have risen exponentially to the point that an acre of land can cost over $100,000 while the rights can fetch a few tens of thousands at best—in other words, they cannot afford to, though in principle they are in favor of a Land Trust.

Thus, this fifth-generation family on the Old Field is working to sustain the what is the second Long Island vineyard and its land for more generations to come, practicing sustainability, hand-harvesting their fruit, and producing wines red and white wines, including an unusual white that is made from Pinot Noir, two Chardonnays, a Cabernet Franc, and two Merlots, not to speak of a Blanc de Noir sparkler that had earned 90 points from the Wine Spectator.  It begins in the vineyard, along with a great deal of sweat.